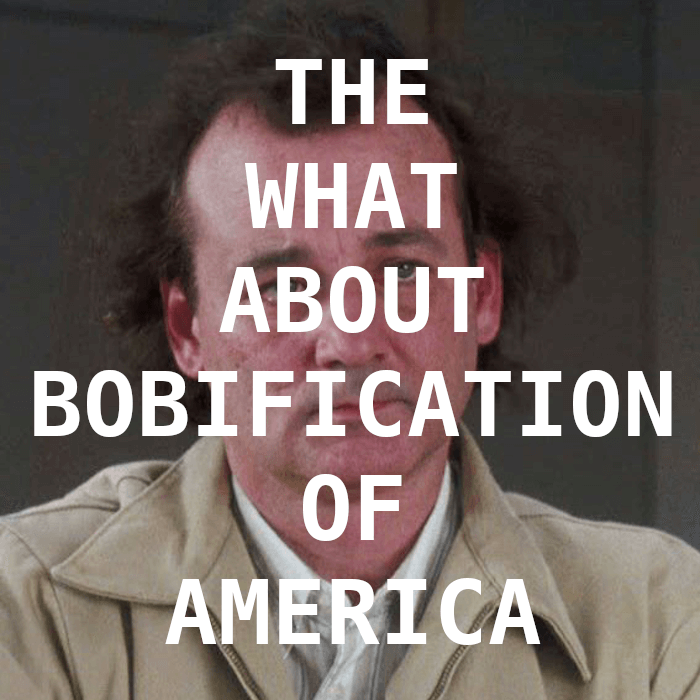 Episode 47 - The What About Bobification of America

What About Bob was funnier when it was just a movie.

My name is Ryan and I am an agorist. Today, we are talking about the What About Bobification of America.

I don't know about you, but I love Bill Murray. I enjoy basically every movie he has ever done. The dude is a blast. One of my favorites is called What About Bob.

No matter how many decades pass, I can't help but laugh out loud while watching it. In that classic, Bill Murray plays a man named Bob who is scared of everything. He is desperately scared, everywhere he goes, about getting sick. Everyday things are almost impossible for him because of this extreme fear. He can't open a door without first wiping the knob. He can't get on a bus with other people. Things like getting into an elevator are monumental tasks for him. In one scene, he holds his breath the whole time while on an elevator with other people. It's hilarious.

He wants help dealing with this obvious mental condition and seeks out Dr. Leo Marvin. But, even the great Leo Marvin can't handle the absurd extent of Bob's phobias. The whole movie is ludicrous and hilarious, as you watch Bob baby step his way through life, scared of everything.

But, alas, times change and the comedy of yesterday has somehow become the reality of today. As I go out to the store, I am surrounded by Bobs. These people are terrified of breathing the same air as people around them. They are terrified of touching something that someone else has touched. They wear gloves and face shields and are scared to get on a bus or into an elevator with others. This kind of irrational behavior was funny in the context of one man in a comedy movie in the '90s. But, it isn't so much when everyone acts that way.

I was in Best Buy today, and they are one of the silliest when it comes to the mask wearing and all that stuff. I marched in like I always do, ignoring the people at the front. I found what I needed to but then asked a worker a question. As soon as he saw me, he physically jumped. I went to ask him my question again but he cut me off, saying, "Sir, you need to wear a mask here. I cannot speak to you if you won't wear a mask." I chuckled and told him that I am not able to. Another worker showed up with a box of masks. He held out the box of masks toward me as far as he could possibly reach, and turned his head away from me as far as he could so that he was as far from my face as possible. It was incredibly goofy and over the top, yet that is the 2020 norm in many places.

If you had told me a year ago that today the majority of people in public would act like Bob from What About Bob, I wouldn't have believed you. And yet, here we are.

We seemingly live in a world of Bobs and it isn't funny any more. I'm left wondering if death therapy isn't really that bad. Where's that giant meteor when you need it?